A Profile of the flute from Lone Crow Song

Part 1 About Leonard
Part 2 About the Flute

Back in 2005, while I was performing in Phoenix at a flute circle on steroids called "Flute Odyssey", I met, and bought a very interesting flute, from Leonard McGann of Lone Crow flutes.

Leonard had traveled all the way from his home in rural Virginia, located on "Difficult Creek Road", to come to the Odyssey. Quite a journey to say the least. I found him to be a kind, warm person, but with a mischievous sense of humor too.

Since then we have stayed in touch and visited during many flute festivals, sharing insights and a few laughs. Okay, a lot of laughs... The most recent event where Leonard and I got to hang out was at the Musical Echoes festival in Florida last May. It was, as always, a lot of fun. 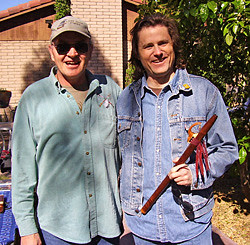 With Leonard McGann at the Flute Odyssey

Then, earlier this summer I learned, with great sadness, that Leonard is very ill. With few exceptions, NAF makers do not make a lot of money, and the sluggish economy has hit them just as hard has it has hit the rest of us. (Us being NAF fans, not Wall Street bankers.) So in addition to dealing with his declining health, he has a mounting pile of medical bills.

Several flute auctions were started to help Leonard with his medical bills, most notability one put together by Randy and Shelly Stenzel of Feather Ridge flutes.

As a recording artist and performer I obviously didn't make flutes that I could donate to the auctions, but I did have the ability to record a song on one of Leonard's flutes. I decided to use the first one I got from him back at the Odyssey gathering. I chose this flute for a number of reasons. For one thing I can’t pick it up and not be reminded of Leonard, but I also chose it because it has a non standard tuning, and I thought that would suit a song written for Leonard. The tuning gives it a unique, one-of-a-kind, quality and Leonard has a unique, one-of-a-kind, quality too!

The resulting song was “Lone Crow Song”. It is available for sale as an MP3 digital download and 100% of the proceeds from all sales of the song go to Leonard to help him and his family deal with his medical bills.

Since it is a very unusual flute I thought it would be interesting to take a look at it in more detail, and that's what this post is all about.

The main scale on the flute is a pentatonic scale, but is not the standard NAF minor pentatonic scale. It has the same notes of that scale, but starts, and ends, one whole step lower. The bottom note is G above middle C and the notes produced are as follows: G-A-C-D-E-G

A standard NAF minor pentatonic with these notes would start, and end on A, and would be look like this: A-C-D-E-G-A

Although it might look complex all you do is keep the second hole from the bottom covered at all times while opening all the others in succession, starting from the bottom, to play the scale.

Notice how the name of the scale 1-2-4-5-6 describes the intervals that are found in the scale.

It is in this scale that I played and wrote “Lone Crow Song”.

THE MINOR PENTATONIC ON A LONE CROW FLUTE
This flute can also play a standard NAF minor pentatonic scale. However, the root note will not longer be the bottom note of G, but will now be the the note a whole step above, which is the pitch A. When playing this scale the flute is now in the key of A.

Just like with the main Lone Crow scale, the 2nd hole remains covered at all times. The bottom note really can be played of course, but the root of the scale is still located on the second hole. The A. Like all NAFs in minor pentatonic the intervals are: Root, Min-3rd, 4th, 5th, Min-7th, Octave.

Normally on a typical NAF you could only play one scale and have it be in tune, much less two. But on this ingenious flute we can play another scale! A diatonic major scale.

THE DIATONIC MAJOR SCALE ON A LONE CROW FLUTE
Not only was Leonard able to build this flute with two different pentatonic scales, but he also got a major diatonic scale out of it as well. The so~called “Do-Re-Mi” scale.

Remember, a diatonic scale has seven notes, not just the five found in a pentatonic scale. And to play the diatonic scale on this flute the root note is moved back down to G, the bottom note.

Notice how there are two cross fingerings in this scale. The first one happens between notes A and B, the second between notes E and F.

Obviously this is a very complex flute hidden in the simplicity of the NAF design. It is a lot of fun to play and challenges the performer to go farther than the standard minor pentatonic NAF. It’s a lot like Leonard. If you can get your hands on one you'll really enjoy it.

If you would like to help Leonard McGann you can purchase a digital download MP3 copy of Lone Crow Song from the Cedar Mesa Music website. Remember, all proceeds from this song are being donated by Cedar Mesa Music to Leonard.